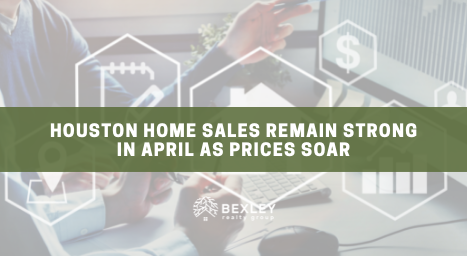 HOUSTON — (May 11, 2022) — The Houston real estate market had a robust performance in April, however, for the first time in 2022, sales volume failed to best last year’s historic pace as record high prices, rising interest rates and limited inventory weighed on homebuyers during what is traditionally the busy spring homebuying season.

Single-family home sales were statistically flat, registering a fractional 0.2 percent decline with 9,079 units sold compared to 9,100 in April of 2021. On a year-to-date basis, however, the market has kept the momentum of what has so far been a strong year – running 7.4 percent ahead of 2021’s record-setting volume. Would-be homebuyers who have instead opted to rent drove single-family home leases up 17.2 percent, but pulled back a bit from townhome and condominium leases, which fell 3.0 percent.

Homes priced between $500,000 and $1 million experienced the largest increase in sales in April, registering a 45.0 percent year-over-year sales volume gain. That was followed by the luxury market – consisting of homes priced at $1 million and above – which shot up 24.9 percent. The $250,000 to $500,000 housing segment came in third place, climbing 13.5 percent.

A continued lack of available homes priced below $250,000 has left consumers no choice but to shop for more expensive homes amid rising interest rates or to lease. Mortgage rates are surging at the fastest pace in 40 years, driven largely by the Federal Reserve’s more aggressive efforts to curb inflation.

“Contrary to what some people think, we do actually have new listings hitting the market, but they are selling exceptionally quickly and at some of the highest prices of all time as buyers and investors make cash offers well above asking price to beat back their competition,” said HAR Chair Jennifer Wauhob with Better Homes and Gardens Real Estate Gary Greene. “Consumers have grown increasingly weary of the buying frenzy and many are considering postponing their purchasing plans because pricing and interest rates have exceeded their reach. Unfortunately, we don’t anticipate conditions to improve anytime soon.”

The ‘Close to Original List Price Ratio’ for single-family homes reached 100.6 percent in April — the highest percentage ever. That means that a majority of buyers paid above list price for homes on the market. The ratio first broke the 100 percent mark last June, and did so again last July, as high-dollar buying began to permeate the market.

Record high home prices, rising mortgage interest rates and dwindling inventory caused the Houston real estate market to slow its roll in April, with many consumers putting off purchases and sitting tight or opting to rent instead. Single-family home sales were statistically unchanged year-over-year, however on a year-to-date basis, they are 7.4 percent ahead of last year’s record pace.

Months of inventory edged up to a 1.4-months supply, which is just slightly above the lowest level of all time. Over the past year, its highest level was a 1.7-months supply from July through October of 2021. Housing inventory nationally stands at a 2.0-months supply, according to the latest report from the National Association of Realtors (NAR). A 6.0-months supply is traditionally considered a “balanced market,” in which neither the buyer nor the seller has the upper hand.

Single-family home sales were statistically flat in April with 9,079 units sold across the Greater Houston area compared to 9,100 a year earlier. Strong sales volume among higher-end homes pushed pricing to historic highs. The median price climbed 16.6 percent to $343,990 while the average price rose 14.9 percent to $426,061. These prices are not only new record highs, but the average price represents only the second time in history that single-family pricing exceeded $400,000. The first time was a month earlier, in March 2022. 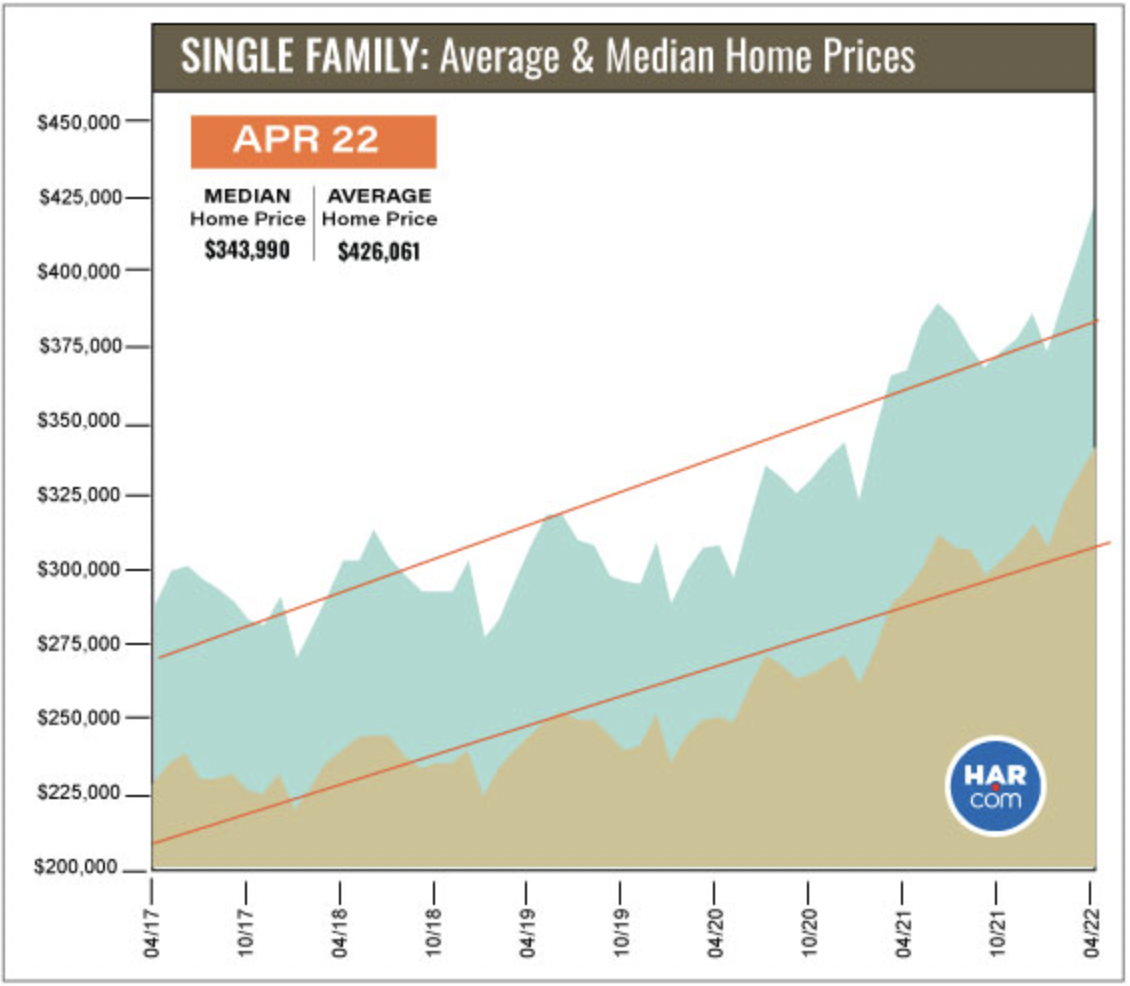 Days on Market, or the actual time it took to sell a home, dropped from 40 to 33 days. Inventory registered a 1.4-months supply compared to 1.3 months a year earlier. That is only slightly above Houston’s lowest inventory level of all time – 1.2 months, which was recorded in February and March 2022. The current national inventory stands at 2.0 months, as reported by NAR.

Broken out by housing segment, April sales performed as follows:

HAR also breaks out sales figures for existing single-family homes. Existing home sales totaled 7,296 in April. That was up 0.8 percent from the same month last year. The average sales price rose 15.3 percent to a record high $429,620 while the median sales price climbed 15.8 percent to $337,500, also an historic high. 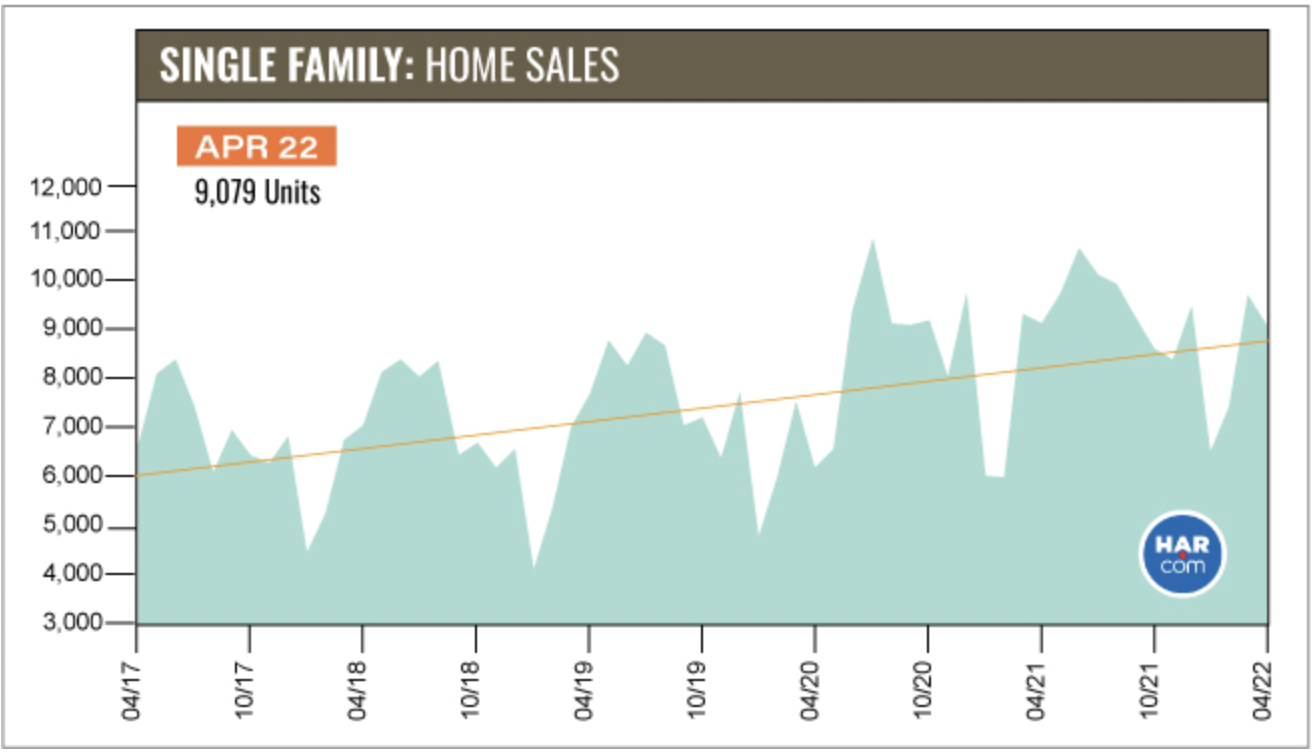 Townhouses and condominiums scored another positive month in April. Sales volume rose 3.4 percent with 818 closed sales versus 791 a year earlier. The average price rose 11.6 percent to $273,575 and the median price jumped 17.5 percent to $234,950. Both figures represent the highest pricing of all time. Inventory fell from a 2.6-months supply to 1.5 months. 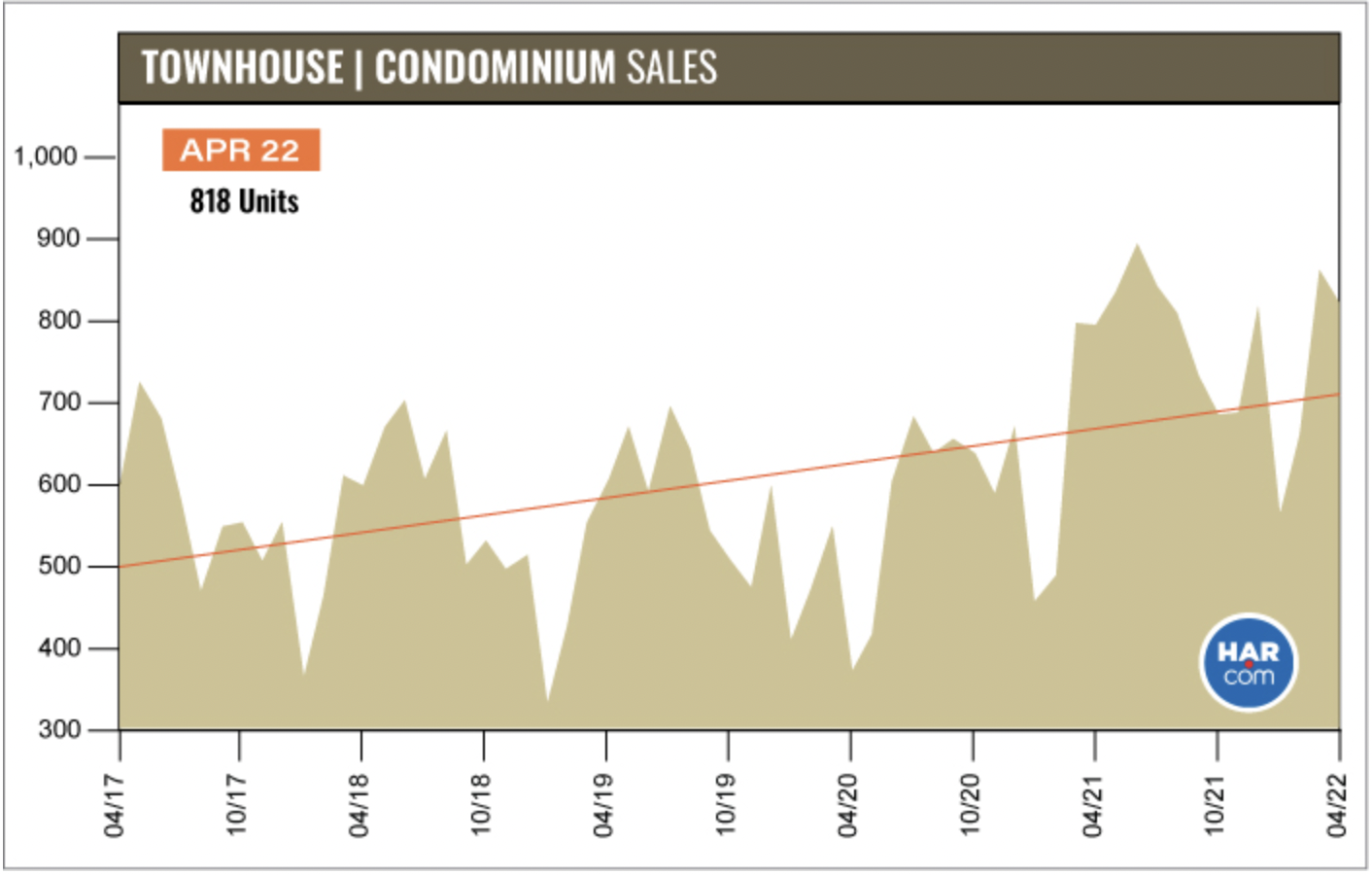 ·       The ‘Close to Original List Price Ratio’ for single-family homes reached 100.6 percent — the highest ever — as a majority of buyers paid above list price for homes on the market;

·       Single-family home months of inventory registered a 1.4-months supply, up from 1.3 months a year earlier; 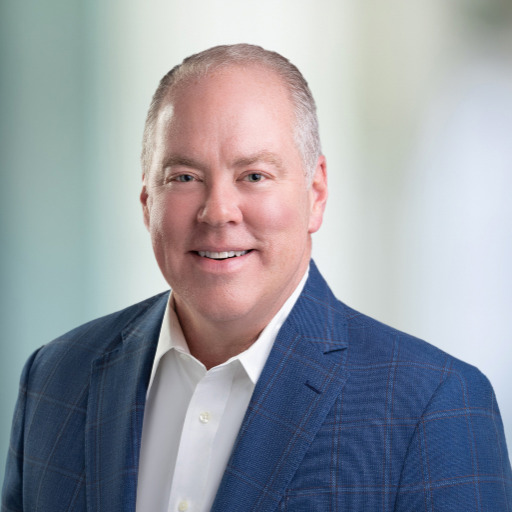 We understand that buying or selling real estate is more than just a transaction: it's a life-changing experience. That’s why our team of highly-seasoned real estate professionals are dedicated to p....

A Reliable Real Estate Advisor Offers Professional AdviceWhether you're currently a homeowner or want to become one soon, you're certainly seeking for straightforward facts on the current housing

How Do You Know Offering the Asking Price Enough in Today’s Market?

Is Offering the Asking Price Enough in Today’s Market?If you're thinking about buying a house this year, you're undoubtedly considering what you'll need to do to have your offer approved.

The Dream of Owning a Home Is Worth the effort

The Dream of Owning a Home Is Worth the Effort If you're looking to buy a home this season, don't give up. Any market, including today's, presents hurdles to homebuyers. However, if you stick with,

By registering, you agree to our terms of use and that real estate professionals from eXp Realty in Houston and lenders may call/text you about your inquiry, which may involve use of automated means and prerecorded/artificial voices. Message frequency varies. Text HELP for help or STOP to cancel. You don't need to consent as a condition of buying any property, goods or services. Messages/data rates may apply. Additional information about data use is in our privacy policy.